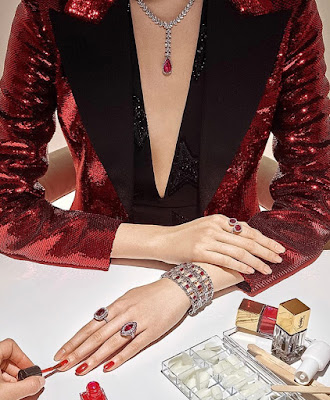 The last acquaintance was resistant, things resorted to a loss in one's life and their kingdom yet I prevailed. Emila would forever remember who I was and what I represented. She would never forget the likes of me ever!! Now, that we had come to a proper agreement, I was taken to what they would call "A Higher Court" for briefing.

I wasn't sure of the meeting locale for such a higher court per se. Nevertheless, I arrived at the selected destination to find my next opponent gracefully getting her nails done. Her hands were perfectly immortal with a fresh red coat of polish,  jewels of ruby and diamonds paired with a red lip and blazer. They called her, El Deviler.

Enlightened the presence instantly was, adorned in my signature all-white attire once again for it held an air of access and a reserve to my weapons. I dare come unarmed.

"You may have a seat, I've been awaiting your presence though I'm quite surprised you've made it this far and whole" El Deviler stated with no eye contact made or even such the slight movement of a proper greeting. Interesting, yet if I had to, my orders were to cut the snake off at its head. I sat crossed legs allowing my white leather custom gloves to show its muscle.

"What are your demands?" she asked still not giving me the proper respect of eye contact.

"No demands at all, actually just requesting access without force" and spoke, now deciding it was best to stand. I was going to need full range because what they all didn't know was that it was indeed a New God Order whether they liked it, approved of it or not. It was upon all of their heads. I merely was just the chosen messenger.

"I see, so you believe you can enter into my court, my dominion, one that has been established from old and what, demand my throne of rule. What am I to do, simply hand over what has been to the likes of you, a new breed holder, yet an old slave." she daggered as she raised her head up parsing me with her black eyes. I had the urge right then and there to behead her but I wanted... wanted to experience a proper fair play, so I relaxed my shoulders in a slow-motion move and gracefully flipped my hair behind my shoulders, smiled and proceeded to give way to understanding for clarity purposes.

"Pardon me, where are my manners, you must be mistaken. I did not come here to contend nor did I come to overtake the dominion but to inform you of what is now set in order. To give awareness that your reign has been quite the advantage of control, deceit and false opulent order yet even the likes of you shall bow down on this day."

"And I figured you would believe such the thing." Before another word touched the air swiftness filled its compacity with the sword of overthrown and detached the serpent of old from its body.

"Bow down living or bow down in death but you all shall bow down!!" I spoke outwardly as behind the walls blackness covered through many faces of darkness as the only sounds left was the exit after I watched the body dropped to its knees.

The table had held its power for such a time but even time ran out at some point. A New God Order has now come into reign, as in heaven as also now on earth...