The Evening Was Served With A Side Of Success 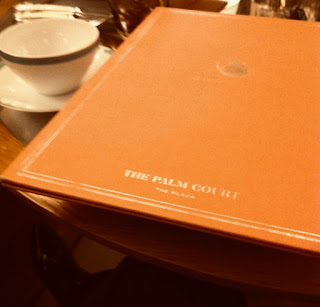 I was taking meetings and setting myself up for purposed-filled interviews that were closed with a kiss of success. I wasn't taking just anything, as my creative content grew daily. I wondered though, when would it really hit, as I Entered The Plaza Hotel's iconic, swanky venue for high-end evening tea at The Palm Court. I certainly was in proper attire dressed via smart casual, wearing all black from head to toe including my crocodile business envelope.

I arrived late on purpose but not too late, I was only shy by 3 minutes. Anything more was being cocky especially sense I attained this meeting through my confidence and eye for the arts. I was indulging more and more knowledge, I was hungry for it. So, this meeting was important to further expand my appetite, hunger and craving that I had acquired.

"Good evening SJ, perfect timing, please allow me to take your coat" I heard Evan say but was caught up with the other three bodies now all standing up with wide smiles on their faces. Why were they smiling? And why wasn't I informed that there would be others in attendance. Nevertheless, I kept my poker face, though I already knew that my facial expression though I was smiling, told the entire story without edit.

"Good evening SJ, I think I speak for everyone when I say my apologies on the unexpected extra company but when our associate Evan informed us that he would actually be meeting with you, we could not turn down the opportunity to meet you in person. Please let's all have a seat, we have much to discuss" said the tall, lean natural red head that had a bob cut so sharp at even given moment it could be felt. The others accompanying us now were a brown smooth skin gentlemen with a mock neck navy blue sweater, a nice pair of blue jeans and some nice and I mean really nice black suede and croc sneakers. Lastly, was a younger looking girl, with a sleek pony tail and a cute yet sassy emerald green wrap dress.

Evan turned and said "SJ, my apologies I was looking to tell you once you arrived under my assumption of an early arrival but.." I decided to cut him off mid-sentence of trying to explain to me. "Evan, no worries, business associates of yours and now from the looks on their faces, are business associates of mine. I'm quite sure this meeting is going to be one I'll never forget or regret.

"I can promise you  SJ, it won't" responded the red head whose name I still didn't get as of yet. She continued, "Let's order and get this meeting started, I'm sure SJ is wondering why we're all here and what this meeting is really about."

"Finally, I said aloud. Someone that is going to get this meeting started" I watched in almost slow motion as she raised her finger effortlessly and like magic the waiter appeared.

"Yes, I'll have the earl grey tea with soy steamed milk for now. Thank you."  As I continued to watch and read everyone, as they placed their orders. What was this meeting really about? I wasn't doing nobody's blood sacrifice for the exchange for all the riches in the world and I sure wasn't signing up to be apart of no one's Illuminati either. It got weird because for more than a moment no one said anything, like what was really happening? This is too weird and now I'm moments and I mean moments away from getting up and walking completely out. Honestly, of course I didn't want to do that but then, it happened. The girl who I mentioned earlier who seemed so young with the sleek ponytail broke her silence.

"You're exactly what I expected, that is, expected you to be. My apologies for the weirdness I can only imagine what you were thinking but I was confident that I would read all about it on your blog either later this evening or early morning upon your wake up. You've been quite busy I've noticed. Creating content in many forms and on a consistent daily basis across several platforms. I like. Very intriguing. Especially with your background. (Background I thought, oh she looked me up up) Yes I looked you up up, as the double word usage gives the affect to the word meaning. Yes, I did...it's my job to do so and I like everything you're doing. When Evan reveled to me that he knew you and was looking to do a collaboration on a project I thought, one that's perfect but two I had a project that would collectively make all your work make since and for some reason I couldn't understand why you had not got on board as of yet. That left me with questions. Do you not believe you have what it takes? But then I thought, that couldn't be because I see that you have an upcoming documentary and recently you've just did a podcast that by the way might I say congrats because once that hits SoundCloud and iTunes it will open up more storage for your creative content. I know I'm like all over the place, I can see it in your eyes, so let me get this out there and onto the table. I think, no I know it is time for you to really step out in front of the camera, like take your blog, the whole New Literary It Girl and Signed SJ on the road. It won't serve you no good to stay behind the scenes, not with the state you have reached. We love what you have created, where you go, the story, and the people you add in. And your wordplay forget about it. Sometimes, I can't tell when you're telling a story or when you're telling a story. If you know what I mean. Which is perfect. And that needs to be more than just via public reading but before we jump out there and present you having a show we would like to see what happens by testing you on YouTube first with of course a nice contract, full promo and marketing.You will keep creative control of course it's your show and once you come over to the network you retain Executive Producer, Writer, & Director Credits. How does that sound?"

I heard all of what she had said. Every word loud and clear. Words like network and executive producer just had me well, on stuck, on silent, and now on, I could only imagine how my facial expression looks at this very moment. I took a long sip of tea, as if I was in this dream and I was trying to wake up not to lose it but to see if I still had it. I took another sip and then the words just took over. "I have to pray about this, you do understand?" I informed them not asking but telling them because as sweet of a deal it was I couldn't make a move without God's permission first. He knew my beginning and my end. He saw parts that I couldn't see and he knew parts that I didn't know. I had made the mistake only months ago when I landed a 5figure deal only to make moves on my own and have someone rob me in my face though I got the majority of the money back over several months. I  had dealt with depression and lost a valuable asset in the process only setting me back for a greater comeback with God. From then on out,  I knew to go to God in prayer first and once I attain the answer then and only then would I make my move.

"Well, SJ, hashtag God's It Girl, I wouldn't have expected a different answer from you. Do what you must and let Evan know your answer and we'll make arrangements to get everything set up. This is your show, we just see a bigger picture though knowing you, you've calculated that out already too. Enjoy the rest of your tea and whatever else you would like to have it is all on us and please enjoy the remaining of your evening and have a great weekend. Oh, and I look forward to reading your next blog post. But I'm more interested in seeing it on the big screen, television first then a movie. Almost like Sex In The City but with Black Girl Magic without the sex.

We said our goodbyes and I sat there in silence and still in shock. What just happened? Was I just offered my very own show based of my blog on a major network? Was I at the same time being offered support to establish a buzz on YouTube? Was it all about to add up? Mind you, I meet Evan from Instagram who reached out to me saying keep up the good work one afternoon. From there we just grew a friendship.

I jumped up, just liked popped up right from out of my seat. I needed to walk, I needed to hear some music, block everything out and just walk and take this all in. I think, I really just almost caught the Holy Ghost but because of where I am I caught myself on the pop up. Could you imagine if I would of broke out in the Holy Ghost up in The Plaza Hotel. Oh child... let me get up out of here. I started moving quickly, as fast as I could out of The Palm Court but before I could even reach the main hall entrance way, I yelled out Yesss God Thank You Gloryyyy!!!! and did a two step combo shuffle that was so smooth everyone could tell it was for a joyous celebration. One lady said "Darling whatever it is, congratulations you must deserve it." That last line caught the attention of my brain that sent a quick response signal to my eyes and well, that was all she wrote. I was crying tears of joy and with that, know that someone is always watching and that if nothing else God is good all the time.

P.S. Do whatever you do until what you do grabs the right people's attention. Blessings & Favor.