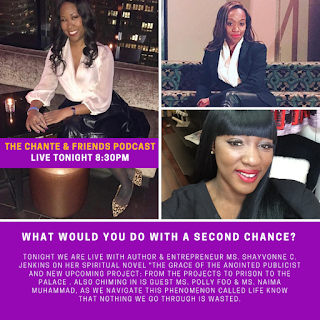 What would you do with a second chance? I knew the answer to that question for sure. Had the answer while growing up in the projects with visions matching prophets. Yet I choose another route it seems. Deciding on wears for the podcast show tonight I thought God has a huge sense of humor and a way to make things come back full circle.  I was excited about being a guest on my friend, Film Director and International Documentary Winner Chante Graham. The twist was me reaching out to my friend Polly Foo which added to the include of telling this story of past while still standing amiss the mass of wrongs yet turned right; I was releasing secrets tonight. Secrets I was prior ashamed of but it can't all be luxury though it was. It all worked together for the good and just like that I grabbed my Karl Lagerfeld Black Velour and Lace Top with this long A-line Black Zara Skirt, paired that with a Black Tuxedo Blazer and I instantly was dress in all black for the occasion.

Stepping out into the night crisp air in Brooklyn headed to the TV Station but not before scooping up Polly. Multiple thoughts played in my mind about this evenings of engaging. One thing for sure the atmosphere was amazing and SJ was fully alive. I was given moments of amazing and I was stepping in each one of them blazing for God because by far he was my reason for the existence and giving him the glory was more than just something to do.

"We're here!" my big sis said, as I thought over every single person that was a part of who I was now and what was about to happen in my life. It takes a village to raise a child and it takes a team to get one to the top. This I know, whether that person hurt you or deserted you, it still served a value lesson and strengthen you be thankful because in disguise it was a blessing.

"Chante please" I stated to the door person.
"Yes, 2nd floor right this way" she replied as we all said our greetings  headed towards the elevator.
Greenroom was my first stop, the feeling in the atmosphere was just perfect and full of life... I was alive. Walking into Studio 3 all I could hear was Meek Mills song "Cold Hearted II" it was on repeat mentally; and I was able to utilize it as the intro to the podcast literally. 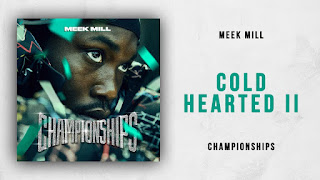 It was more than relatable this last track on his new album "Championships" It went perfectly with the answer to the question, "What would you do with a second chance?" Meek starts off with "Make it out the Hood they say you Hollywood" I've heard that more than I would like but it was the truth. Are we not suppose to make it out or stay there in the biggest trap while generation after generation die off in that trap. While trapping in the trap... wow it was literally a trap and we flipped it and bragged about trapping in the trap. Words have power I guess that's why so many get caught up in the trap, options through ball and rap. I remember taking tap... tap dance that is.

Chante introduced me as Author and Editor-In-Chief of The Couture LifeStyle Magazine, we are going to discuss her spiritual novel 'The Grace of The Anointed Publicist."  Question after question as I watched the live from Facebook on her phone light up in colors. It is no wonder, we were so transparent of showing our true colors. We had an obligation to the cause, I thought of my son Justice as I recalled a conversation that stated we are obligated to put our children in places where they can dream and if not we should be ashamed of ourselves. This podcast content was needed for value, was needed for those still locked up on the Island.

I came up out of my blazer and rest it upon my shoulders. It was work time. I watch P state facts and spoke about how in prison she remembered all those that were still locked on their backs. This thing is bigger than physical incarceration it is mental I stated. Recalling my answer and stating that its starts way before the physical. "What would you tell the youth now? Some young lady or young guy hustling still?" I answered recalling my former lifestyle while living a double lifestyle. Thinking that was gangsta but it was, right? Because it is what so many see growing up and become influenced by it. Caught up in a systematic spider web the ultimate trap. We made it out but there is still more work to be done.

Why was this? Why were so many raised up in this trap? Yet we are and some go astray like myself addicted to the rush...the ultimate crush until it crush. And then there's a shift and something happens... life changing and the question begins to be answered out in your real life as you evolve and shed layers upon layers as you break but only to be build back up. And all things become new and the rainbows from your childhood that seemed so magical are here again. And words like peace and positivity are real...priceless. You can look back over everything and know that you are cold hearted to the trap and its no turning back. You are present in a place called your future and standing in belief of  your dreams opening up in its truth to an actual reality. Possibilities are endless and you are now granted an access that you no longer have to bust a finessing score because you are enough. You see now...like really see that that storm that took you astray has landed you right on the proper course. Glory to God for this excellent night, and a new life of good choice.

P.S. check out that new Meek Mill song I was talking about at https://meekmill.lnk.to/championships  called "Cold Hearted II"  Shout out to a thing call change and people courageous enough to change. Blessings!!!