My Next Novel Scandalous Waters Is More Than What You Think... 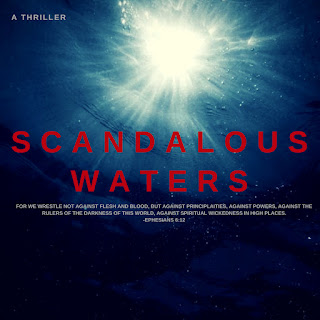 I was releasing it, I for sure thought it wouldn't happen not because it couldn't but because honestly it just didn't align up with God's will. He came first, even though I'm a writer my boss is God. But He saw it fit and spinned this story in an amazing direction. At first I couldn't see it visually. I'm a different type of creative, like I can hear music and see an entire scene or the still of quietness can assist in my creative juices to design sceneries of any kind can gravitating  me into a creative submission.

It came to me one morning as I looked out towards the million dollar view I was currently living in. Just like that I saw the entire story flash before. What was amazing was I was led back to my spiritual novel which is currently online in Barnes & Noble, Amazon and Goodreads too. I wrote about how this would be the book to make it to become a film, a New York Times Best Selling book and also have a 7 figure deal attached to it. The odd thing was when I wrote that it was back in 2015 and since then just recently the author Tomi Adeyemi of Children of Blood and Bone had landed just the deal, giving me a solid confirmation that it was possible.

The story took place in an international setting but was mainly based right in New York City & Bergen County New Jersey. For some reason, I believed James Patterson would be pretty impressed. It was a thriller that's for sure, but the spin of the storyline in real time was the bait and the hook.
The odds of a spiritual writer writing a thriller, a suspense thriller at that. Yes, murder, corruption, violence and all the elements in those realms would be apart of this storyline but that was the beauty of it. Coming at it, at an entirely different angle. Scandalous Waters was a story that you wouldn’t even see coming but when did see it, you would understand why “Some Secrets Even The Waters Can’t Hold.