I Am A Professional Word Player... 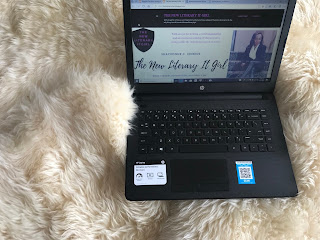 ...I am, and upon waking up after getting in the bed at lets say around 2am, wait it might had been 3am. I was back up in 5 hours. But, that's the life I signed up for, sacrifice now play later. I turned over like any other social media addict and reached for my phone only to find that it was off. Go figure, my dates were totally off for payment. Well, that was the kick I needed to get me in gear, so I quickly got up and called T-Mobile where I have a business account at and spoke with a customer service representative to ask for a courtesy turn on. Well, I knew it was kind of going to go left when she kept asking about my password even after I gave it to her a few times. She honestly had me second guessing for a moment. I was done once she wasn't able to do a thing for me. I had to maintain the realms of the tone for my day, keeping it positive and fresh and alive. See as a writer, space of  and for clarity is important and what I let in is even more important. Next thing I knew the phone went tone dead after asking for a manager guessing she hung up not sure but I knew exactly what I had to do.

I grabbed my bible, I asked God for a word and opened it up to Ezekiel chapter 34 verse 12 and starting reading at "...so I will seek out my sheep..." and continued to verse 15. I closed with a prayer and dialed T-Mobile again. This time I was meet with a fresh, lively voice and lets just say he understood the importance of being a business owner and keeping the lines of communication open and restored my service until the end of the business day giving me the needed time to make my payment. No biggie to you but to the likes of a gal who is a true entrepreneur living the life she deserves the right way I just scored a winning touchdown first thing in the morning.

I quickly thanked God, check my social media and was happy to see responses to the new Christian play I'm working on. Some loved the title "I'm Not Going To Play House, Be Wifey, And/or Act Like We're Married" while others like my sister in Christ reposted it and others, were excited about signing up. All was a plus, but I noticed one thing in my Insta story that I had to quickly fix and it was a misspelled word. Yes, I said a misspelled word. That one word could end my professional word player life, seriously. Words have power and should be treated with the upmost respect and care. Plus, I just never know who is watching. Maybe the next movie producer or a talent scout or someone interested in my work. Whomever or whatever it is I have to stay sharp!

I mean, I can't be a professional and move in a
n unprofessional manner even if it was a typo. It needed to be corrected and I wanted to share a life lesson at the same time. Professional word player or not, mistakes were going to occur, typos can and will happen but its up to me to fix it and make them right not allowing it to stop me, block me or even harm me. Today is starting off wonderful already and it isn't even noon yet.

Well, I'm off to the gym and to pay T-Mobile XOXO