The Origin of SheBillionaire of Wall Street 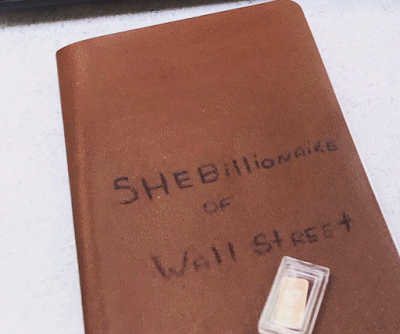 Today is February 2, 2022, and for a reason greater than myself I choose today, well actually tonight because its 11ish pm and here I am editing a draft I came across dated from July 5, 2019, with a time log of 8:28pm...
...That was the thing about SJ, she wasn't your average individual or in the case of this matter Founder/SheBillionaire of Wall Street. She entered into the Wolf of Wall Street scenery as each step brought her closer to a new height. New heights indeed were the targeted aim but honestly, she didn't see this on the horizon. Did her ambitious nature lead her here or was it just sheer destiny?
The walk in her step as an air of wealth shifted through each confident stride. No, she didn't literally hold a background in finance yet her past sure did. This is what made her who she is now and honestly speaking, it all was working for her good and so shall this too.
Greetings of good morning poured upon her filling her cup until it ran over with positivity and gratefulness as she entered the "Equitable Building". She feed off this high-level energy and vibration that was just flowing freely upon her for she knew the power that the tongue held and indeed, life and death as the good book says were in the power of the tongue and more than just a scripture verse but a noted key secret to life and the living of it. One would not believe unless documented notes that indeed SJ had thought herself into Wall Street. That's right thought herself into Wall Street. Is it even possible? A mere non-believer would say so but those selected individuals that knew, knew that in fact it was very much possible that one could think themselves to wherever they choose to be.
SheBillionaire was a name she not only created back in 2016 but also took quite the likened to it for her target goal towards financial freedom and independence. Something she found that was more than needed as a black woman from the ghetto to not just accomplish but make it a lifestyle. Though a writer and self-published author the attitude was to create several streams of successful earning income.
"True I wanted the title of New York Times Best Author and true enough that I shall have but the mere notion of adding value of this caliber was enough excitement and added wordplay in this realm that would sure fit the score for the perfect fiction novel or maybe even a fab 2nd edition quote book to inspire others to reach higher heights." Yeah, it was the purpose behind it all. Having the authority to help people secure their lives and their families future. I mean after all; one's exterior isn't as powerful until it is accompanied by a brilliant mindset!
Yes, it's energy and allure. The guidance of God and added characteristics that I will need to acquire to become the best version of myself. It's my anointing and favor. Walking solely by faith yet fully aware of my calling. Up to date my life has never had a dull moment. Could they see it in her eyes, the lion inside? Her fearlessness and stature? Of course, they could, it was all over her dripping with a confidence only God could provide. It was her, SheBillionaire of Wall Street rising up from the inside.
And so, "SheBillionaire" of Wall Street begins... and I'm going to need them to see me coming!
Signed SJ The New Literary It Girl